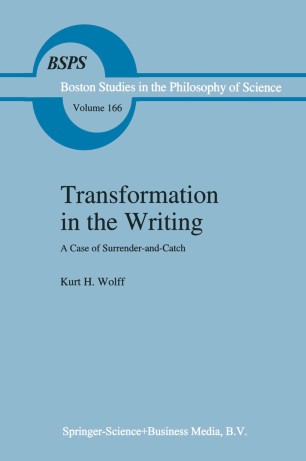 Transformation in the Writing

Part of the Boston Studies in the Philosophy of Science book series (BSPS, volume 166)

Kurt Wolff has written principally in two veins (in English) for the last fifty years, 1) on sociology, epistemology (sociology of knowledge) and the philosophy of sociology; and 2) on the relevance of his formulation of "surrender and catch" to human experience, particularly in its cogni­ tive forms. He published Trying Sociology in 1974, which contains his writings on sociology, and Surrender and Catch: Experience and Inquiry Today in 1976, which contains his writings on surrender-and-catch. In more recent years, he has published two books, 0 Loma! Constituting a Self (1977-1984) in 1989 and Survival and Sociology: Vindicating the Human Subject (1991). Both of the more recent books add a third vein which is autobiographical and which moves back and forth between the previously established approaches in the earlier works. Transformation in the Writing is the most ambitious to date, because, as Wolff points out in the beginning, it contains writings that "fall quite obviously into three classes: autobiographical; sociology of knowledge, sociology, poetry, phenomenology, hermeneutics, critical theory; and our time and its sociological analysis. " The task of this book is to illuminate the connections among these three classes. Wolff has engaged in autobiographical writing his entire life, though this approach to writing has only in recent years grown closer to his intel­ lectual preoccupations with sociology and philosophy.