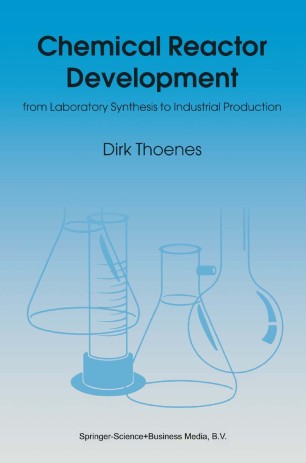 From Laboratory Synthesis to Industrial Production

Chemical Reactor Development is written primarily for chemists and chemical engineers who are concerned with the development of a chemical synthesis from the laboratory bench scale, where the first successful experiments are performed, to the design desk, where the first commercial reactor is conceived. It is also written for those chemists and chemical engineers who are concerned with the further development of a chemical process with the objective of enhancing the performance of an existing industrial plant, as well as for students of chemistry and chemical engineering.
In Part I, the `how' and the `why' of chemical reaction engineering are explained, particularly for those who are not familiar with this area. Part II deals with the effects of a number of physical phenomena on the outcome of chemical reactions, such as micro and meso-mixing and residence time distribution, mass transfer between two phases, and the formation of another phase, such as in precipitations. These scale-dependent effects are not only important in view of the conversion of chemical reactions, but also with regard to the selectivity, and in the case of solid products, to their morphology. In Part III, some applications are treated in a general way, including organic syntheses, the conversion and formation of inorganic solids, catalytic processes and polymerizations. The last chapter gives a review of the importance of the selectivity for product quality and for the purity of waste streams.
For research chemists and chemical engineers whose work involves chemical reaction engineering. The book is also suitable as a supplementary graduate text.