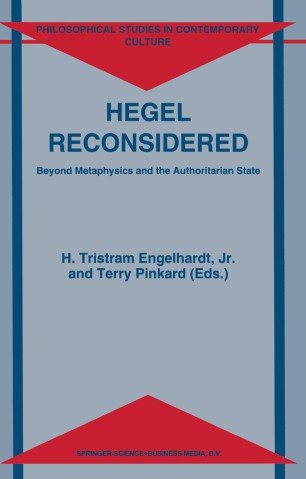 Beyond Metaphysics and the Authoritarian State

Much of contemporary philosophy, political theory, and social thought has been shaped directly or indirectly by Georg Wilhelm Friedrich Hegel, though there is considerable disagreement about how his work should be understood. He has been described both as a metaphysician and characterized as an ironic narrator who anticipated the character of philosophy after metaphysics. His position is equally ambiguous with regard to his political thought. He has been construed both as an enemy of the liberal state and as a friend of freedom.
This volume's revisionist reassessment, building on the scholarship of Klaus Hartmann, explores these ambiguities in favor of a non-metaphysical reading of Hegel's arguments. It also shows how the foundations of his political thought support a liberal democratic state. This reappraisal of Hegel's arguments resituates him as a philosopher who anticipates the difficulties of post-modernity and offers a basis for reassessing ontology, aesthetics, and revolution. Philosophers and those doing work in political theory will find this volume of great interest.