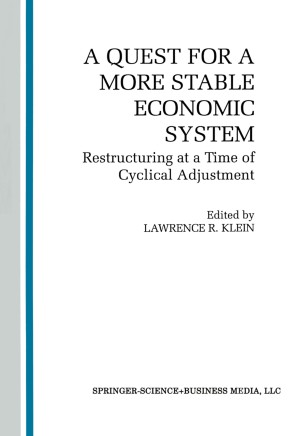 A Quest for a More Stable World Economic System

Restructuring at a Time of Cyclical Adjustment

In the autumn of 1990 there was a sense of change taking place in the world economy. Readiness for war was occurrin~ in the Middle East and a recession was already underway in a few major countries. The forces of reform and political re-shaping were visible in Eastern Europe and the Soviet Union. We economists, gathering in Osaka, Japan, under the auspices of the International Institute for Advanced Studies (Kyoto) could recognize that the Cold War was over and that politico-economic restructuring would take place among the powers in the Warsaw Treaty Organization. Much has happened since the latter part of 1990 to affect international economic stability. The events of that period were both positive and negative for economic stability, but our concern was weighted towards the negative side. Dur charge and sponsorship was scholarly, and the papers from the learned contributors to the symposium and this resulting volume used the many tools of economic analysis to try to understand the ongoing developments. In the intervening period, while this volume was being prepared and edited, we did not cnange our viewpoints in any fundamental way, and we can take satisfaction in the way our symposium either relates to the unfolding sequence of events in a substantive sense or provides a framework in which to study these events.