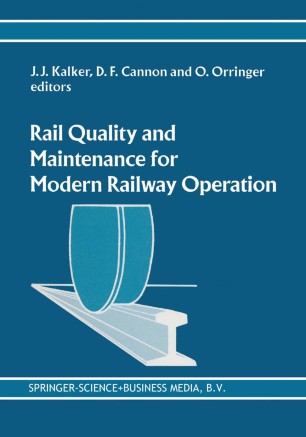 In April 1990 a conference was held at the Cracow Institute of Technology, Cracow, Poland. The title of that conference was "Residual Stresses in Rails - Effects on Rail Integrity and Railroad Economics" and its themes were the measurement and prediction of residual stresses in rails, but, as the sub-title suggests, the intention was also to provide a link between research and its application to the practical railway world. At the Cracow conference there were 40 participants with 5 railways and 5 rail makers being represented and 25 papers were given. The Cracow conference was a success, and by March 1991 its off-spring, "The International Conference on Rail Quality and Maintenance for Modern Railway Operations", was conceived and birth was ultimately given in June 1992 at the Technical University, Delft. It turned out to be some baby, with 112 delegates from 24 countries taking part! As with its predecessor, the conference was to provide a forum for the exchange of ideas between research investigators, rail makers and railway engineers. A cursory examination of the list of participants suggests that about 57% were from the railway industry, 34% from universities and other research institutions and 9% from the steel industry. Bearing in mind that some of the railway industry participants were from their respective research and development organisations the balance of interests was about right.