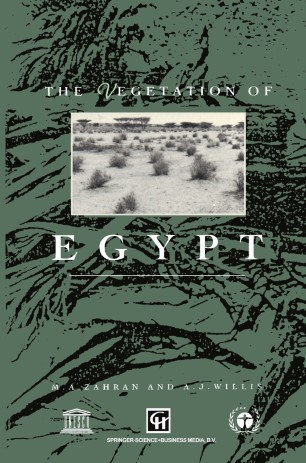 The Vegetation of Egypt

This book is an attempt to compile and integrate the information documented by many botanists, both Egyptians and others, about the vegetation of Egypt. The first treatise on the flora of Egypt, by Petrus Forsskäl, was published in 1775. Records of the Egyptian flora made during the Napoleonic expedition to Egypt (1778-1801) were provided by AR. Delile from 1809 to 1812 (Kassas, 1981). The early beginning of ecological studies of the vegetation of Egypt extended to the mid-nineteenth century. Two traditions may be re­ cognized. The first was general exploration and survey, for which one name is symbolic: Georges-Auguste Schweinfurth (1836-1925), a German scientist and explorer who lived in Egypt from 1863 to 1914. The second tradition was ecophysiological to explain the plant life in the dry desert. The work of G. Volkens (1887) remains a classic on xerophytism. These two traditions were maintained and expanded in further phases of ecological development associated with the es­ tablishment of the Egyptian University in 1925 (now the University the Swedish Gunnar of Cairo). The first professor of botany was Täckholm (1925-1929). He died young, and his wife Vivi Täckholm devoted her life to studying the flora of Egypt and gave leadership and inspiration to plant taxonomists in Egypt for some 50 years. She died in 1978. The second professor of botany in Egypt was F. W. Oliver (1929- 1932) followed by the British ecologist F. J. Lewis (1935-1947).