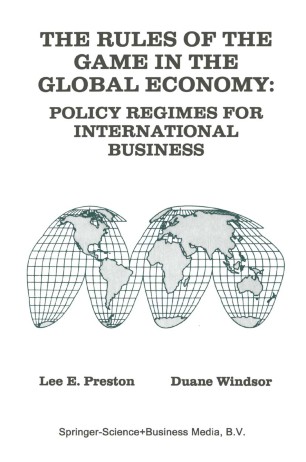 The Rules of the Game in the Global Economy: Policy Regimes for International Business

This study has been long in the making, and the world has changed dramatically while we have been at work. We initially anticipated a substantial section on the Soviet-dominated Council for Mutual Economic Assistance (CMEA or "COMECON"), which offered an interesting contrast to the kind of international business regime typically found among market-oriented countries and industries. As we moved toward publi- tion, the CMEA vanished, and so we mention it only in passing. The USSR subsequently disintegrated into a Commonwealth of Independent States (CIS). On the other hand, we began with the assumption that the historic "rule of capture" no long played a significant role in international economic relations. The seizure of Kuwait's territory and wealth by the government of Iraq suggests that this assumption was heavily influenced by wishful thinking. Even though this seizure has been reversed by military action, the experience remains a challenge to generally held beliefs about the strength of "order" versus "chaos" in contemporary international affairs. Some readers of this volume have suggested that it gives insufficient attention to the fact that many of the important business and economic regimes of the postwar period are currently under significant pressure, perhaps even in danger of collapse. We acknowledge that there are many evidences of strain in, for example, the free trade and money exchange regimes, and in many areas of environmental protection.

'In conclusion, The Rules of the Game in the Global Economy is an important book that should be required reading for all students of international business. It opens up new vistas for research and enquiry into the future geopolitical arrangements that would envelop and direct international business and management both between and whitin MNEs and nation states.' Journal of Inter. Business Studies 1994
Buy options