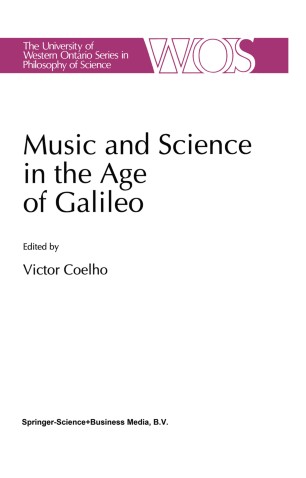 Music and Science in the Age of Galileo

Part of the The University of Western Ontario Series in Philosophy of Science book series (WONS, volume 51)

Music and Science in the Age of Galileo features twelve new essays by leading specialists in the fields of musicology, history of science, astronomy, philosophy, and instrument building that explore the relations between music and the scientific culture of Galileo's time. The essays take a broad historical approach towards understanding such topics as the role of music in Galileo's experiments and in the scientific revolution, the musical formation of scientists, Galileo's impact on the art and music of his time, the scientific knowledge of instrument builders, and the scientific experiments and cultural context of Galileo's father, Vincenzo Galilei. This volume opens up new areas in both musicology and the history of science, and twists together various strands of parallel work by musicians and scientists on Galileo and his time.
This book will be of interest to musicologists, historians of science and those interested in interdisciplinary perspectives of the late Renaissance -- early Baroque. For its variety of approaches, it will be a valuable collection of readings for graduate students, and those seeking a more integrated approach to historical problems.
The book will be of interest to historians of science, philosophers, musicologists, astronomers, and mathematicians.