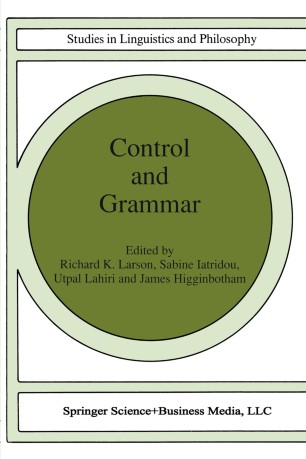 Part of the Studies in Linguistics and Philosophy book series (SLAP, volume 48)

The articles in this volume grew from papers presented at the workshop on control held at the Massachusetts Institute of Technology, March 1989. The work of the various authors comes at a moment in linguistic theory that is notable for two developments. First, there has been increasing involvement of syntactic theory in semantics and of semantic theory in syntax, with the result that the sorting of facts into syntactic and semantic has become a more complex and theory-laden affair. Second, there has been an enormous growth both in the breadth and depth of studies in languages other than English. Both of these develop­ ments have left their mark on the authors, directly and indirectly. They have also been responsible for the shifts that have given the key terminology its present range of application. In this introduction we discuss the background to the issues that were particularly prominent both at the workshop and in the authors' final drafts. We also com­ ment on the spirit of inquiry that they represent. Our goal is to provide some orientation to the specific contents of the essays and to supply material for reflection on a set of problems that will doubtless develop and deepen as rapidly in the foreseeable future as they have in the recent past.