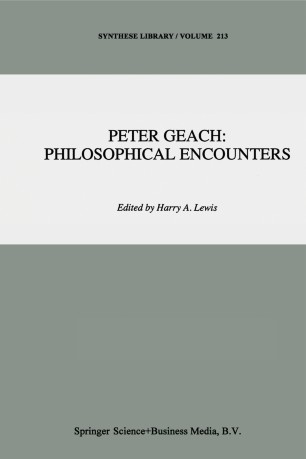 The present volume owes its existence to a proposal of Dr Esa Saarinen. Our aim was to celebrate the work of a living philosopher by presenting it both from his own point of view, through the medium of a philosophical autobiography, and from that of his closest philo­ sophical colleagues and adversaries. We felt that a philosophical career lived through vigorous controversy was best reflected not by adulation but in the spirit of that career - by open debate. Contributors were not constrained in their choice of topic, but their contributions fell naturally into groups linked with some of Peter Geach's principal areas of interest, and we have so grouped them in the book. There is an interweaving of biographical and philosophical themes, not only in Peter Geach's philosophical autobiography, but also in the introductions he has contributed to each section. Professor W. V. O. Quine's contribution, which consists of extracts from his correspondence with Peter Geach, has been set apart as it forms a natural bridge between Peter Geach's autobiography and the contri­ butions that follow. Their correspondence reproduced here throws new light on many familiar themes from the writings of both philosophers: among them, the objects of belief and other attitudes, issues in set theory, the nature of causality, and evolution in epistemology.