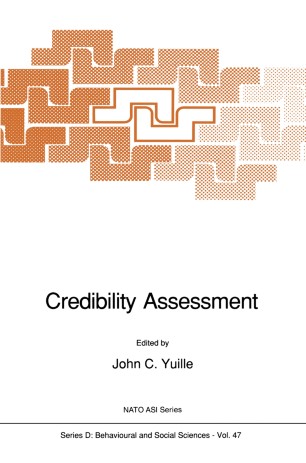 Credibility assessment refers to any attempt to ascertain truthfulness. Other terms which have been used to refer to the assessment of credibility include the detection of deception and lie detection. The term lie detection has become virtually synonymous with the use of the polygraph and can no longer be used to refer to the range of procedures currently employed to assess credibility. Also, both lie detection and the detection of deception have a negative cast which does not fully capture the orientation of current approaches to credibility. Consequently, the term credibility assessment has emerged recently as the preferred label. The goal of credibility assessment is typically the determination of the truth of a statement or be found in set of statements. The need or desire to make such an assessment can every human context from marital relations through clinical examinations to police and court interrogations. Examples of the kinds of statements which require credibility assessment are: 1) A child's assertion that she or he has been sexually abused. 2) The claim by a previously suicidal person that he or she has recovered and will not attempt suicide again. 3) The denial of guilt by a suspect in a criminal investigation. 4 ) The confident statement of a witness that he or she is sure in his or her identification of a thief. 5) The vow of loyalty by a potential employee for a security job. It is necessary to assess the credibility of these and similar statements.