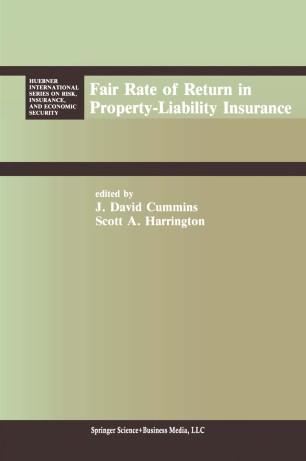 Property-liability insurance rates for most lines of business are regulated in about one-half of the states. In most cases, this me ans that rates must be filed with the state insurance commissioner and approved prior to use. The remainder of the states have various forms of competitive rating laws. These either require that rates be filed prior to use but need not be approved or that rates need not be filed at all. State rating laws are summarized in Rand Corporation (1985). The predominant form of insurance rate regulation, prior approval, began in the late 1940s following the V. S. Supreme Court decision in United States vs. South-Eastern Underwriters Association, 322 V. S. 533 (1944). This was an anti trust case involving one of four regional associa­ tions of insurance companies, which constituted an insurance cartel. The case struck down an earlier decision, Paul vs. Virginia, 8 Wall 168 (1869), holding that the business of insurance was not interstate commerce and hence that state regulation of insurance did not violate the commerce clause of the V. S. Constitution. Following South-Eastern Underwriters, the Vnited States Congress passed the McCarran-Ferguson Act, which held that continued state regulation and taxation of insurance was in the public interest. The act also held that the federal antitrust laws would not apply to insurance to the extent that the business was adequately regulated by state law. (See V. S. Department of Justice 1977.