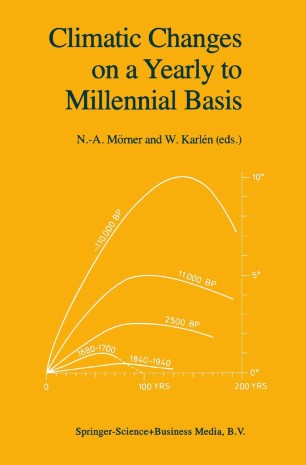 Climatic Changes on a Yearly to Millennial Basis

Nils-Axel Marner &Wibjarn Karlen Organizers of the Stockholm Symposium in 1983 Stockholm University, Sweden This book is the Proceedings of the SECOND NORDIC SYMPOSIUM ON CLIMATIC CHANGES AND RELATED PROBLEMS held in Stockholm, Sweden, May 16-20, 1983 (Frydendahl et al., 1983; Marner, 1983). This was "an international interdisciplinary symposium with special refe­ rence to Nordic records and their relation to global climatic changes". The first NORDIC SYMPOSIUM ON CLIMATIC CHANGES AND RELATED PROBLEMS was held in Copenhagen in 1978 ( Frydendahl, 1978) and had a very broad scientific program. The SECOND NORDIC SYMPOSIUM was specifically directed to certain problems, time ranges and sources of information, as discussed below. Scandinavia is a classical area for the study of climatic fluctuations during the last 20,000 years . A major part of the basic data for the international theories and synthesis originate from Scandinavian data. This applies, for example, to: (1) The drastic climatic fluctuations in connection with the re­ cession of the land-ice giving rise to the alternation of inter­ stadials (warm periods with rapid ice recession) and stadials (cold periods with readvances or retardations in the ice recession). (2) The climatic changes during the Holocene with its well-known sub-division according to the Blytt-Sernander system (nowadays being used far outside the boreal region for which it was origi­ nally defined). (3) The Holocene climatic optimum and the subsequent climatic de­ terioration at around 2500 BP (well-established already at the beginning of this century).