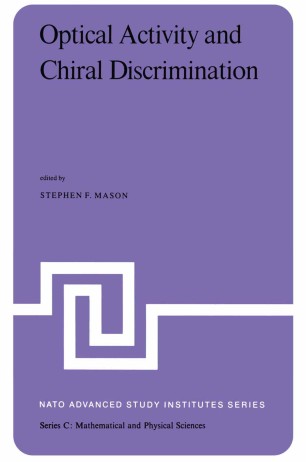 Proceedings of the NATO Advanced Study Institute held at the University of Sussex, Falmer, England, September 10–22, 1978

For Louis Pasteur, the two distinctive properties of dissymmetric systems, optical activity and chiral discrimination, provided prime evidence for a Divine origin to the universe. Handedness appeared to be built into the macrocosm of the galaxies, each with a non-superposable mirror image by virtue of its rotation, as well as the microcosm of each molecule of most natural products. The best that the chemist in the laboratory could accomplish appeared to be the synthesis of the detordu internally-compensated meso-form and, as Pasteur ultimately came to admit, the externally-compensated racemic­ form. In the latter case the chemist generated not merely one but two chiral structures, although parity, and secondary­ symmetry generally, seemed to be conserved in the enantiomer­ antipode pair. The cosmic element in the Pasteur tradition received an augmentation in secular form from demonstrations of the non­ conservation of parity in the weak interactions, and from the discovery of net circularity in the extra-terrestrial photons, such as those from the less-distant planets, particularly the photons from the Jupiter red-spot. The development of the photoacoustic circular analysers a decade ago was received in fact with as much enthusiasm by the astronomers as by the chemists. It would be just to add, however, that the majority of these circular analysers are now to be found, not in the observatories, but in the physical and chemistry laboratories devoted to the molecular aspects of the Pasteur tradition.