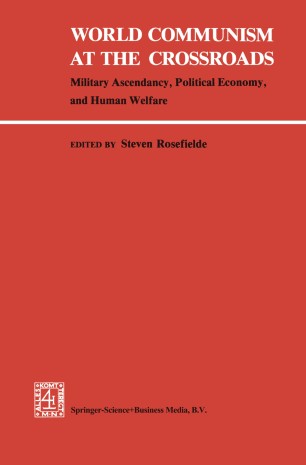 World Communism at the Crossroads

The collection of essays presented in this volume grew out of a series of lec­ tures given at the University of North Carolina during the academic year 1976-1977. The series was sponsored by the Soviet and East European Stud­ ies Program, which I chaired at the time, and the Curriculum of Peace, War and Defense, headed by James Leutze. In the ensuing years almost all the manuscripts have been redrafted at frequent intervals to reflect the changing state of knowledge in each respective discipline. The final version of the text that appears here is therefore the outcome of a long developmen­ tal process. It is up to date and embodies our individual views on world communism at the present juncture. Although the recent Soviet invasion of Afghanistan occurred shortly after this volume was completed, that event has not impaired the book's timeliness. The findings of Rosefielde, Lee, Valenta, and Leutze all point toward a resurgence of Soviet expansionism, and Parker explicitly predicted the Afghan invasion in the first draft of his essay, June 1978 (see p. 32).