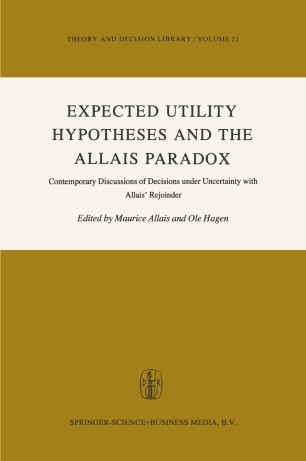 Contemporary Discussions of the Decisions under Uncertainty with Allais’ Rejoinder

Utility theory or, value theory in general, is certainly the cornerstone of decision theory, game theory, microecon~mics, and all social and political theories which deal with public decisions. Recently the American School of utility, founded by von N eumann­ Morgenstern, encountered a far-going criticism by the French School of utility represented by its founder Allais. The whole basis of the theory of decisions involving risk has been shaken and put into question. Consequently, basic research in the fundamentals of utility and value theory evolved into a crisis. Like any crisis in basic research, and this one was not an exception, it was very fruitful. One may simply say: Allais versus von Neumann-Morgenstern, or the French School of utility versus the American School, became one of the battlefields of scientific development which proved to be a most creative source of new advances and new developments in all those sciences which are based on evaluation of utilities.