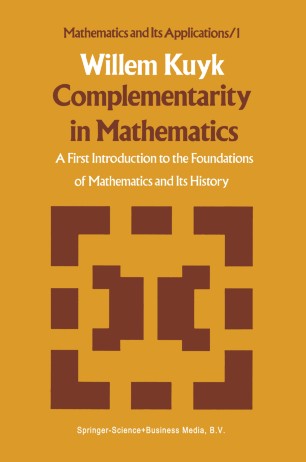 A First Introduction to the Foundations of Mathematics and Its History

Part of the Mathematics and Its Applications book series (MAIA, volume 1)

As long as algebra and geometry The unreasonable effectiveness of proceeded along separate paths, mathematics in science . . . Eugene Wigner their advance was slow and their applications limited. But when these sciences joined Weil, if you knows of a better 'oie, company, they drew from each go to it. Bruce Bairnsfather other fresh vitality and thence­ forward marched on at a rapid pace What is now proved was once only towards perfeetion. imagined. Wi1liam Blake J oseph Louis Lagrange Growing specialization and diversification have brought a host of monographs and textbooks on increasingly specialized topics. However, the 'tree' of knowledge of mathematics and related fields does not grow only by putting forth new branches. It also happens, quite often in fact, that branches which were thought to be completely disparate are suddenly seen to be related. This series of books, Mathematics and Its Applications, is devoted to such (new) interrelations as exempla gratia: - a central concept which plays an important role in several different mathematical and/or scientific specialized areas; Editor's Preface 8 - new applications of the results and ideas from one area of scientific endeavor into another; - influences which the results, problems and concepts of one field of inquiry have and have had on the development of another. With books on topics such as these, of moderate length and price, which are stimulating rather than definitive, intriguing rather than encyclopaedic, we hope to contribute something towards better communication among the practitioners in diversified fields.