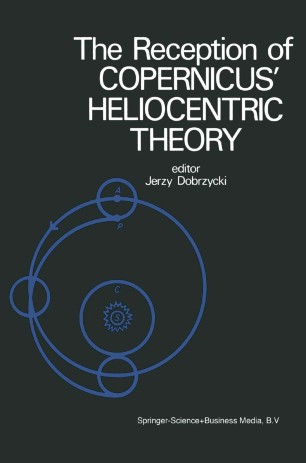 The Reception of Copernicus’ Heliocentric Theory

Proceedings of a Symposium Organized by the Nicolas Copernicus Committee of the International Union of the History and Philosophy of Science Toruń, Poland 1973

In 1965 the International Union of the History and Philosophy of Science founded the Nicolas Copernicus Committee whose main task was to explore the means by th which different nations could co-operate in celebrating the 5 centenary of the great scholar's birth. The committee initiated the publication of a collection of studies dealing with the effect that Copernicus' theory has had on scientific developments in centres of learning all over the world. An Editorial Board, consisting of J. Dobrzycki (Warsaw), J. R. Ravetz (Leeds), H. Sandblad (Goteborg) and B. Sticker (Hamburg), was nominated. We found that our initiative aroused a lively interest among Copernicus scholars; the present volume, with 11 articles by authors from nine American, Asian and European countries, contains the result of their research. It appears in the series 'Studia Coper­ nicana' by agreement with the Polish Academy of Science, and we hope to publish a number of other contributions in a subsequent volume. We are happy to say that our efforts have been fruitful and that this volume presents not only several in-depth studies, but also a more general survey of the rules governing the evolution of science, rules set within the framework of Copernicus' theory as it developed among various nations and in various scientific institutions over the centuries. It has been shown once again that, 500 years after his birth, the work of Copernicus remains a source of scientific interest and continues to stimulate fresh study and research.