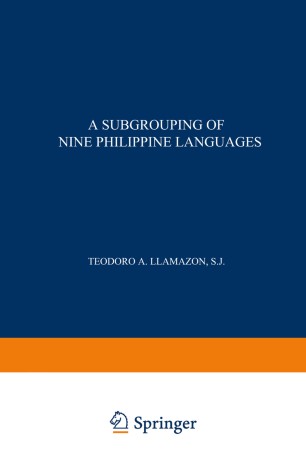 A Subgrouping of Nine Philippine Languages

BY J. C. ANCEAUX Since the appearance of Brugmann's famous article on the relation­ ships of the Indo-European languages in 1884, the subject of sub­ grouping of languages as a methodological problem has been raised only occasionally. To this apparent lack of interest in a major point in comparative linguistics several causes can be assigned. One of them is that a consensus has been reached about the main outlines of the family-tree for the language-family which has received more attention than any other: the Indo-European. Another explanation is that for most of the branches of this family historical materials are available which have proved very valuable for the reconstruction of the inter­ mediate stages between the proto-Ianguage ande the modem languages. For a few branches only has the problem of subgrouping been a matter for discussion (e.g. Germanic). Special attention, however, could be expected from those who started to apply the comparative methods to other language-families. This attention did come forward, though not immediately, because linguists first had to deal with the problems of proving the existence of the family in question and deciding which languages belonged to it. For the Austronesian languages serious attemps to arrive at a lin­ guistic classification started relatively late. Certain cases of closer relationships were obvious enough to be recognized very early ( e.g.