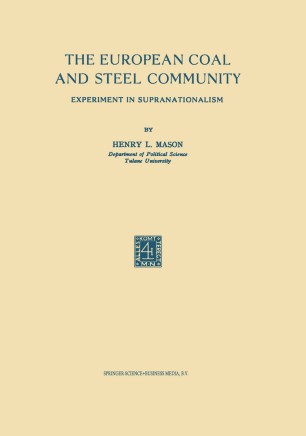 The European Coal and Steel Community

The European Coal and Steel Community has been called "a new structure in the marches between internal and international law. " 1 To describe this new type of structure the term "supra­ national" has found increasing usage. Supranational organs have been defined as standing "midway between 'international' and federal organs. " International organizations - such as the United Nations or the Council of Europe - are based on the "sovereign equality" of their members and non-intervention in domestic affairs; they are really at the intergovernmental level. Supra­ national organs transcend international organizations in both these respects without, however, constituting a federal state. They are based "not on a mere restriction, but on a transfer of [national] sovereignty, but a transfer of sovereignty in a particu­ lar area only. " 2 This pilot experiment in supranational organization is of twofold importance. In the first place, although operating on a regional level only, it could teach valuable lessons concerning future attempts at world organization through the "functional approach. " In Prof. Mitrany's words, national divisions must be overlaid "with a spreading web of international activities and agencies, in which and through which the interests and life of all the nations would be gradually integrated. " 3 The Coal and Steel Community could be an excellent testing ground for the develop­ ment of an international community, growing from the satis­ faction of common needs which people of different nations share.