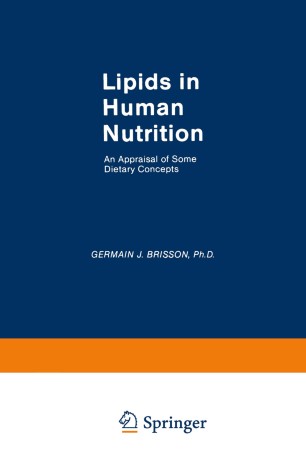 An Appraisal of Some Dietary Concepts

Throughout its history, medicine has benefited from scientific discov­ eries made in complementary fields such as chemistry, physics and biology. Thus, in the middle of the last century, the works of Pasteur, a chemist and biologist, by revealing the world of micro-organisms, bacteria and viruses, made it possible to control a considerable number of often fatal diseases. Guided by the work of this inspired biologist, the English surgeon, Sir Joseph Lister, developed aseptic techniques which have rendered possible the spectacular achievements of modern surgery. It is largely due to such advances that the life-expectancy of man, 50 years at the turn of the century (1900), approaches 75 years in 1981. Even today, however, in spite of this, two groups of ailments, arter­ iosclerosis and cancer, are responsible for 70 per cent of human deaths both in Canada and in the United States of America. The former is a degenerative process of the arterial system, the latter an uncontrolled and destructive cellular proliferation. Although several predisposing factors are known, the essential cause of these conditions is wholly unknown. As long as this ignorance of the etiology persists, all forms of therapy can be no more than palliative.