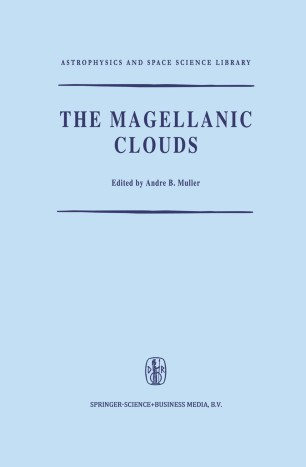 On March 28 and 29, 1969, at the occasion of the dedication of the European Southern Observatory, some 90 astronomers from all over the world gathered at the ESO headquarters at Santiago de Chile for discussing problems of the Magellanic Clouds. They came from Argentina, Australia, Chile, Mexico, South Mrica and the United States as well as from Europe; these latter, naturally, mostly from the member states ofESO. The choice of the subject was an obvious one. When erecting the European Southern Observatory as a joint effort in European astronomy, it was agreed from the beginning that the field of research should be the southern sky, so far hardly explored with large telescopes. Among the objects to be investigated, the Magellanic Clouds rank highest, together with the galactic centre region and the southern spiral structure. Being located ten times closer than the nearest large stellar systems accessible to northern observers, and containing a stellar population ranging in age from the oldest down of star formation, the Clouds provide an ideal laboratory for research on to the stage current problems in astrophysics. Yet, most of the northern observational astronomers were hardly acquainted with the Magellanic Clouds; naturally, they are used to think in terms of research projects that can be conducted at their observatories. A survey of the status of knowledge and research on the Clouds therefore appeared in order now that the first- medium size- telescopes of ESO came into operation.