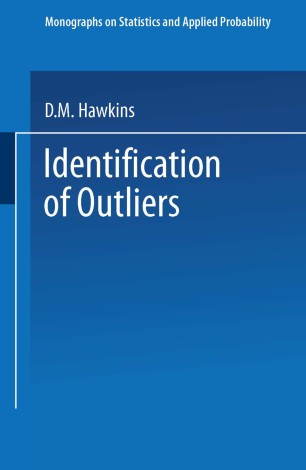 The problem of outliers is one of the oldest in statistics, and during the last century and a half interest in it has waxed and waned several times. Currently it is once again an active research area after some years of relative neglect, and recent work has solved a number of old problems in outlier theory, and identified new ones. The major results are, however, scattered amongst many journal articles, and for some time there has been a clear need to bring them together in one place. That was the original intention of this monograph: but during execution it became clear that the existing theory of outliers was deficient in several areas, and so the monograph also contains a number of new results and conjectures. In view of the enormous volume ofliterature on the outlier problem and its cousins, no attempt has been made to make the coverage exhaustive. The material is concerned almost entirely with the use of outlier tests that are known (or may reasonably be expected) to be optimal in some way. Such topics as robust estimation are largely ignored, being covered more adequately in other sources. The numerous ad hoc statistics proposed in the early work on the grounds of intuitive appeal or computational simplicity also are not discussed in any detail.