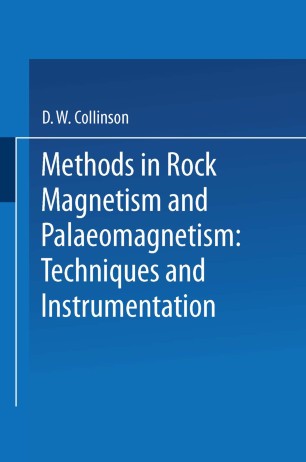 Methods in Rock Magnetism and Palaeomagnetism

During the last 30 years the study of the magnetic properties of rocks and minerals has substantially contributed to several fields of science. Perhaps the best known and most significant advances have resulted from the study of palaeomagnetism, which led to quantitative confirmation of continental drift and polar wandering through interpretation of the direction of remanent magnetism observed in rocks of different ages from different continents. Palaeomagnetism has also, through observations of reversals of magnetiz­ ation, ancient secular variation and ancient field intensities provided data relevant to the origin of the geomagnetic field, and other investigations have contributed significantly to large-scale and local geological studies, the dating of archaeological events and artefacts and more recently to lunar and meteoritic studies. Rock and mineral magnetism has proved to be an interesting study in its own right through the complex magnetic properties and interactions observed in the iron-titanium oxide and iron sulphide minerals, as well as contributing to our understanding of remanent magnetism and magnetization processes in rocks. Simultaneous with the development of these studies has been the develop­ ment of instruments and techniques for the wide range of investigations involved.