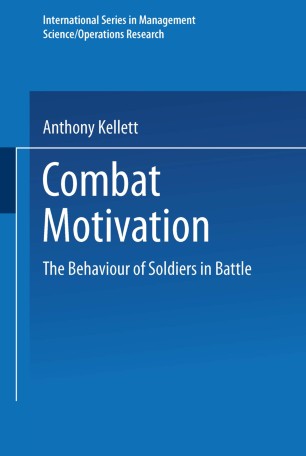 The Behavior of Soldiers in Battle

"What men will fight for seems to be worth looking into," H. L. Mencken noted shortly after the close of the First World War. Prior to that war, although many military commanders and theorists had throughout history shown an aptitude for devising maxims concerning esprit de corps, fighting spirit, morale, and the like, military organizations had rarely sought either to understand or to promote combat motivation. For example, an officer who graduated from the Royal Military College (Sandhurst) at the end of the nineteenth century later commented that the art of leadership was utterly neglected (Charlton 1931, p. 48), while General Wavell recalled that during his course at the British Staff College at Camberley (1909-1 0) insufficient stress was laid "on the factor of morale, or how to induce it and maintain it'' (quoted in Connell1964, p. 63). The First World War forced commanders and staffs to take account of psychological factors and to anticipate wideJy varied responses to the combat environment because, unlike most previous wars, it was not fought by relatively small and homogeneous armies of regulars and trained reservists. The mobilization by the belligerents of about 65 million men (many of whom were enrolled under duress), the evidence of fairly widespread psychiatric breakdown, and the postwar disillusion (- xiii xiv PREFACE emplified in books like C. E. Montague's Disenchantment, published in 1922) all tended to dispel assumptions and to provoke questions about mo­ tivation and morale.