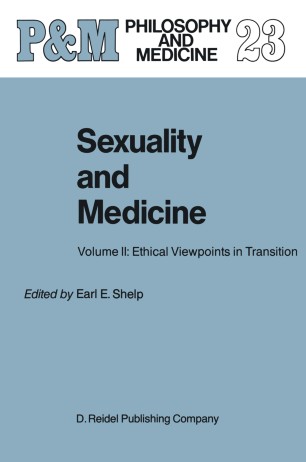 Part of the Philosophy and Medicine book series (PHME, volume 23)

It may be unnecessary to some to publish a text on sexuality in 1986 since the popular press speaks of the sexual revolution as if it were over and was possibly a mistake. Some people characterize society as too sexually obsessed, and there is an undercurrent of desire for a return to a supposedly simpler and happier time when sex was not openly dis­ cussed, displayed, taught or even, presumedly, contemplated. Indeed, we are experiencing something of a backlash against open sexuality and sexual liberation. For example, during the '60s and '70s tolerance of homosexual persons and homosexuality increased. Of late there has been a conservative backlash against gay-rights laws. Sexual intercourse before marriage, which had been considered healthy and good, has been, of late, characterized as promiscuous. In fact, numer­ ous articles have appeared about the growing popularity of sexual abstinence. There is a renewed vigor in the fight against sex education in the schools, and an 'anti-pornography' battle being waged by those on the right and those on the left who organize under the guise of such worthy goals as deterring child abuse and rape, but who are basically uncomfortable with diverse expressions of sexuality. One would hope that such trends, and the ignorance about sex and sexuality that they reflect, would not touch medical professionals. That Dr.