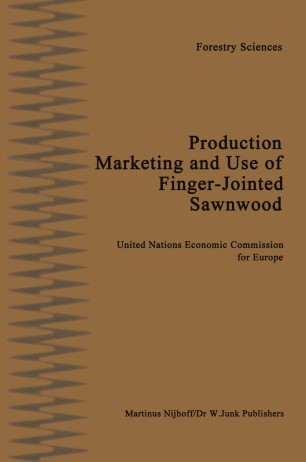 Production, Marketing and Use of Finger-Jointed Sawnwood

Proceedings of an International Seminar organized by the Timber Committee of the United Nations Economic Commission for Europe Held at Hamar, Norway, at the invitation of the Government of Norway, 15 to 19 September 1980

The seminar on the production, marketing and use of finger-jointed sawnwood was held in Hamar from 15 to 19 September 1980 at the invitation of the Government of Norwa;y. It was organized under the auspices of the Timber Committee, a subsidiary body of the United Nations Economic Commission for Europe (ECE) in Geneva, Switzerland. Participants represented the ECE member countries of Belgium, Canada, Denmark, Finland, France, Federal Republic of Germany, Hungary, Ireland, Italy, Netherlands, Norwa;y, Poland, Sweden, Union of Soviet Socialist Republics, United Kingdom of Great Britain and Northern Ireland and United States of America. Observers from Australia and South Africa attended as well, and the United Nations Organization for Industrial Development (UNIDO) was represented. Mr. R. Birkeland of Norwa;y was elected Chainnan, and Mr. V. Turushev of the USSR Vice-Chainnan. During the seminar, study visits were arranged for participants: to Berger Langmoen A. S. , Brumunddal, whi ch produces sawnwood, planed wood, wooden packaging, building components using finger-jointed timber, parquet flooring and fibreboard; to the Moelven Group, Moelv, which produces modular houses and other types of timber-framed buildings and building panels, sawnwood, glue-laminated products, skis, etc. , as well as a number of types of mechanical equipment and vehicles.