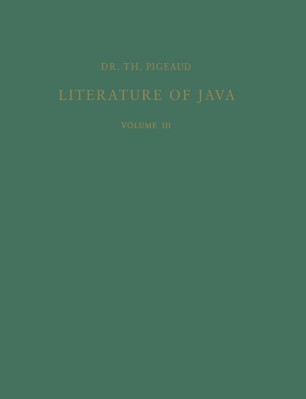 Illustrations and facsimiles of manuscripts, maps, addenda and a general index of names and subjects

The third, concluding volume of "Literature of Java" contains Addenda and a General Index, preceded by Illustrations, Facsimiles of Manuscripts, Maps and some Minor Notes, additions which may be of U'se to students of Javanese literature. The older catalogues of collections of Indonesian manuscripts (Javanese, Malay, Sundanese, Madurese, Balinese), which were written in Dutch, did not offer such additional aids to interested readers. One of the reasons was. , that the authors (Vreede, Brandes, van Ronkel, Juynboll, Berg) presupposed a certain knowledge of the Indones,ian peoples, their countries and their culture with Dutch students. As often as not the latter, or their families, had lived for many years in Java, and they were destined, when they had completed their studies in The Netherlands, to pass one or more decades of 'their active life in the ,tropics in the service of Government, the Christian Missions or the Bible Society. The Archipelago was their second home country. Some familiarity with things Indonesian was found in several circles of society in The Netherlands before the second world war, and information (though not always scholarly and exact) was supplied by quite a number of books and periodicals. For this reason it was thought superfluoU's to encumber specialistic books like catalogues of manuscripts with maps and general information which could be found easily elsewhere, for instance in the Dutch "Encyclopaedie van Nederlandsch-Indie". As circumstances have changed it is.