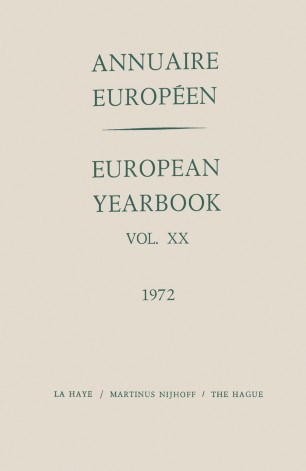 The Treaty of Rome makes no mention of the Mediterranean basin as such, inc1udes not a single provision for the defining of specific relations with that region as a whole. There are only, as a hang-over from the French and Italian colonialist past, certain Dec1arations, in the Appendices, regard­ ing a possible association of Tunis, Morocco, Libya with the new under­ taking. And, of course, there is Artic1e 113 prescribing, at the end of the Community's transition period, the common trade policy - plus the Artic1e (238) giving blanket authorisation for association agreements. These legal prescriptions were duly implemented in the Association Agreements with Greece (1961) and Turkey (1963) and have supplied the basis for bilateral instruments in respect of other Mediterranean lands - ad hoc, pragmatic ar­ rangements. In the circumstances the Community could scarcely have proceeded otherwise. Yet the outlines of a European economic policy with regard to the countries of the Mediterranean basin were there from the beginning -limited, however, over the years by the internal development of the Community itself. One is reminded in this connection of sundry invoca­ tions by European and Mediterranean personalities and members of the European Commission - and, specifically, of a Memorandum presented by Italy to the Council of Ministers in 1964.