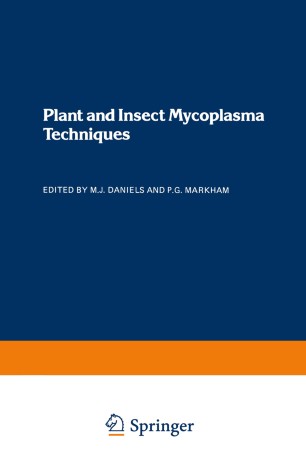 Only 14 years have passed since the first publication appeared which implicated mycoplasmas as agents of plant disease. The diseases them­ selves have been known for much longer; indeed clover phyllody, a typical example, was described in the seventeenth century, well before any animal mycoplasma diseases had been documented. The early history of plant mycoplasmas is described in Chapter 2 and one obvious conclusion to be drawn from the frustrating experiences of the earlier workers is that the experimental methods at their disposal were simply inadequate for the task. Progress in science depends critically upon the development of new methods. Although important advances have been made in plant and insect mycoplasmology, notably in the discovery of spiroplasmas, many intractable problems remain. Most plant myco­ plasmas cannot yet be cultured in vitro, and their natural plant habitat, the phloem, is one of the most difficult plant tissues for the experi­ menter to handle, placing severe restrictions on the type of experiments which can be performed in vivo. It is clear that radically new methods may be required to solve these problems. A survey of the progress which has been made shows that application of techniques from a wide range of disciplines has been necessary. A successful individual or group of workers must possess the skills of a plant pathologist, a plantsman, a plant physiologist, a light-and electron microscopist, a bacteriologist, a biochemist, an immunologist, an ento­ mologist, a virologist and a molecular geneticist.