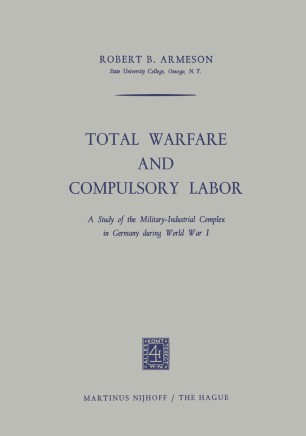 During the latter half of the nineteenth century tremendous economic, technological, and scientific developments took place in Western Europe as states shifted from predominantly agricultural to pre­ dominantly industrial economies. As a result of these changes, the nature of warfare altered. The First World War was not simply a struggle between the armed forces of belligerent nations. It was a total war which Ultimately involved all the forces in the nations on a scale and with an intensity which mankind had never before experienced. Total warfare demanded the entire strength of the nation. In Germany the transition to total warfare began earliest and went furthest. Even there it was born not in the early days of the fighting, but only after the conflict extended beyond the period originally antici­ pated. By mid-I916, the struggle had turned essentially into a battle of material, and it became apparent that its economic and technical aspects were more important than the purely military. An ever greater production of war-essential goods became the paramount need. Germany's armed forces had grown to an unprecedented size, but each man in the military service represented at the same time an increase in the need for supplies and a decrease in the productive labor force. The crux of the problem was the manpower shortage.