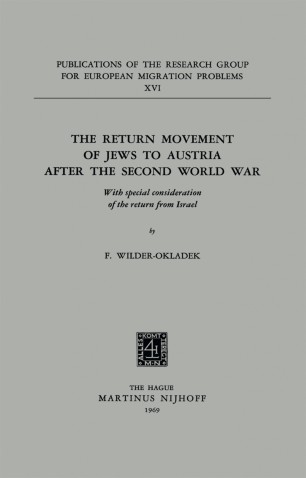 With special consideration of the return from Israël

Part of the Publications of the Research Group for European Migration Problems book series (PRGEMP, volume 16)

The saga of Jewish flight, suffering and death has been investi­ gated from different points of view, and various aspects of this sad chapter of Jewish history have been carefully studied. There is, however, one aspect which has had little attention from Jewish sociologists; perhaps because it is an anticlimax to heroism and monumental suffering; even more, because the whole group imbues a feeling of discomfort, an aftermath that should not have been, a chapter that had better not been written ... "Historically, this group has survived its own past; but humans do not experience their own life as history ... "1 This group is but a very small remnant: those who returned to the very" doomed soil" the very countries in which all the worst atrocities against European Judaism originated. Usually, they do not come back with an easy heart, they experience the anger and sadness of fellow-Jews who condemn them. They also feel their own guilt - yet they return ... How many of them there are is impossible to calculate. Not only were post-war records faulty; but Jewish organisations differed with others and in their own records in the definition of "return" so that all comparisons can be only on the level of careful esti­ mates at best. Lastly, in common with other return groups, there is the unknown number who never registered with those organi­ sations keeping any type of records (e.g. Jewish organisations).