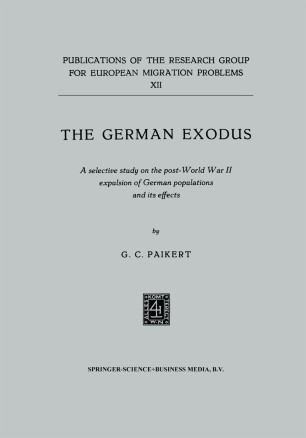 Part of the Publications of the Research Group for European Migration Problems book series (PRGEMP, volume 12)

This brief study of the 1945 expulsion of German populations from Eastern-Central and Eastern Europe does not by any means pretend to be a complete and exhaustive analysis of a subject so massive, complex and controversial. Moreover, it is selective: in dealing with the reception of the expellees it focuses on West Germany, which though most extensively involved, is nevertheless only one of the many countries affected by the exodus. Yet the writer feels that even by presenting barely the funda­ mentals he can still hope to make some contribution to a field which -at least in the English speaking world - is far from being explored, analyzed and evaluated. His concentration on West Germany has been stimulated by two factors. First, this is the part of the former Reich which is most immediately affected by the transfer. Second, as a result of this involvement it is in West Germany that documentation and literature on the question are most extensive. Indeed, to obtain proper information and data from those countries within the Soviet orbit which are in any way linked with the problem is difficult and at times even impossible. For obvious reasons, in these countries interest is centered, and quite understandably, not on the expulsion of the Germans, but rather on the transfer, dispersion, and annihilation of their own peoples under the Nazi conquest, events, which, in turn, many Germans prefer to keep forgotten.