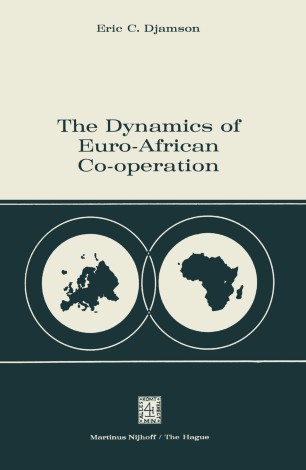 The Dynamics of Euro-African Co-operation

Being an Analysis and Exposition of Institutional, Legal and Socio-Economic Aspects of Association / Co-operation with the European Economic Community

Dr. E. C. Djamson, a distinguished Ghanaian Lawyer and Diplomat, has put political scientists and students of international law into his debt. His work is an important contribution to the literature of Mro-European co­ operation. He examines the history of relations between the European Economic Community and the Associated African States; he provides a thorough analysis of the international institutions and of the wider political, economic and legal problems involved in Mro-European co-operation. The author is concerned with the manner in which Mrican sovereign states are now able to enter into relations with Europe on a basis of legal equality. He emphasizes the principles involved in the law of nations; this should comprise, not merely "civilized" law in traditional parlance, but also Mrican customary law. As Dr. Djamson puts it, "the international community can no longer afford to ignore the principles of law peculiar to the so-called Third World . . . after all the 'general principles of law recognized by civilized nations' are not at variance with the basic ideas of law and justice as understood by the newcomers to the international scene. " At the same time, both the new states and the old, established powers must accept those obligations that derive from their being signatories to international agreement. Adherence to the principle of pacta sunt obser­ vanda does not violate sovereignty, but of itself gives evidence of a country's maturity and ability to co-exist with other sovereign entities. Dr.