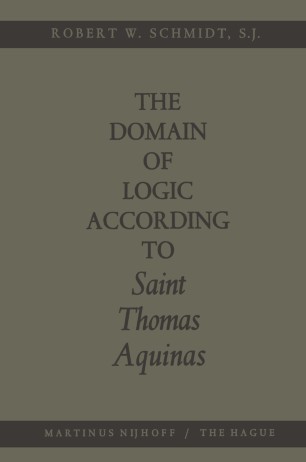 The Domain of Logic According to Saint Thomas Aquinas

Ever since philosophy became conscious of itself, there has been a problem of the relations between the real world which philosophy sought to understand and explain, and the thought by which it sought to explain it. It was found that thought had certain requirements and conditions of its own. If the real world was to be understood through thought, there was a question whether thought and the real correspond­ ed in all respects, and therefore whether they had the same conditions and laws, or whether some of these were peculiar to thought alone. For the solution of this problem it was necessary to study thought and the process of knowing and the conditions which the manner of know­ ing placed upon our interpretation of the real. With a consciousness of the peculiarities of thought and of its laws, philosophers could then more surely make use of it to arrive at the knowledge of the real world which they were seeking, without danger of reading into the real what is peculiar to thought. This necessity gave rise to the science of logic, a science which is still necessary, and for the same reasons. It has an importance in philosophy which it is disastrous to overlook.