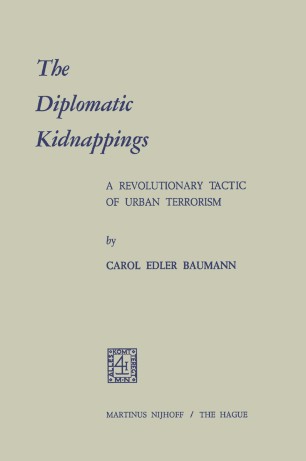 A Revolutionary Tactic of Urban Terrorism

The recent series of diplomatic kidnappings has produced some serious thinking not only in Washington but in most of the foreign offices and embassies throughout the diplomatic world. The kidnappings-and how to deal with them-have been the subject of Congressional committee hearings, State Department deliberations, and international debate and action by the Organization of American States. It is the purpose of this study to analyze them within the context of urban guerilla terrorism, international legal norms, and world diplomatic practice. Selected examples of diplomatic kidnappings, particularly those in Latin America and Canada, strikingly illustrate the new revolutionary strategy of utilizing terrorism as a political tactic to achieve long-range political· goals. As with its kindred phenomenon-the airplane hijack­ ings-the kidnappings of foreign diplomats seize upon and exploit innocent victims as hostage pawns; a bargaining situation is thus created in which the revolutionary minority can achieve a diplomatic leverage which is far greater than in proportion to its numbers, military strength, or popular appeal. Through terrorism the urban guerillas hope to achieve tactical advances within the general strategy of political revolu­ tion; even temporary governmental repression if it occurs in reprisal becomes part of that strategy. Chapter I in particular and the entire manuscript in general examine the kidnappings within the parameters of revolutionary terrorism. The kidnappings have also had serious legal and political ramifications in the realm of world diplomacy.