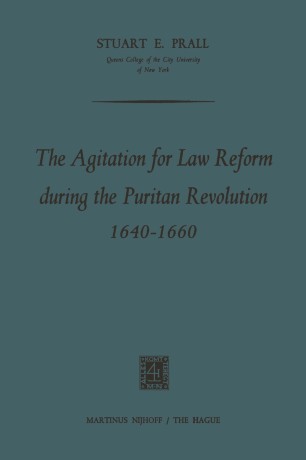 The Agitation for Law Reform during the Puritan Revolution 1640–1660

Throughout this essay all dates are given in New Style. When pamphlets were originally dated Old Style, the new date has been substituted. In all quotations the original seventeenth-century spelling has been retained. A "sic" is placed in the quotation only where it appears to be certain that there has been a misprint in the original. I want to express my sincere gratitude to the late Professor Garrett Mattingly of Columbia University for his inspiration and guidance during the years spent under his sponsorship. It was a rare privilege to study under him. Professor Sidney Burrell of Barnard College offered many constructive suggestions and I am most appreciative of the kind interest he took in the completion of this study. I also wish to thank the editors of The American Journal of Legal History for publishing some of my material on Chancery reform in their Journal. The staff of the North Library of the British Museum was most helpful in making available the many volumes of the Thomason Collection. Thanks are also due to the staff of the Library of Union Theological Seminary who helped in the location of materials from the McAlpin Collection.