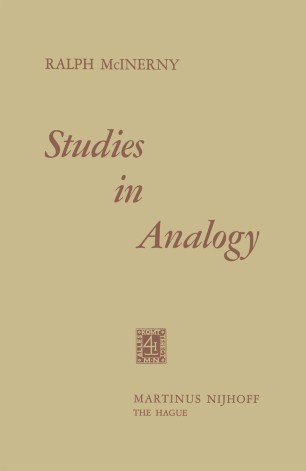 The present volume brings together a number of things I have written on the subject of analogy since the appearance of The Logic of Analogy in 1961. In that book I tried to disengage St Thomas' teaching on analogous names from various subsequent accretions which, in my opinion, had obscured its import. The book was widely reviewed, various points in it were rightly criticized, but its main argument, namely, that analogical signification is a logical matter and must be treated as such, was, if often confronted, left finally, I think, standing. The studies brought together now reflect the same concentration on the teaching of Aquinas. I am not of the opinion that everything important on the question of analogy, and certainly not everything of importance on those problems which elicit the doctrine of analogy, was said by Thomas Aquinas. But it was my decision, for my personal work, first to achieve as much clarity as I could with respect to the teaching of Thomas, and then to go on to other writers, both ancient and modern. I am currently engaged in working out the relations among equivo­ cation, analogy and metaphor in Aristotle. When that study is com­ pleted, I shall turn eagerly to some quite recent contributions to the nature of religious language. In short, the present work, which is by and large a prolongation of my attempt at an exegesis of Thomistic texts, marks the end of one phase of my research into the problem of analogy.