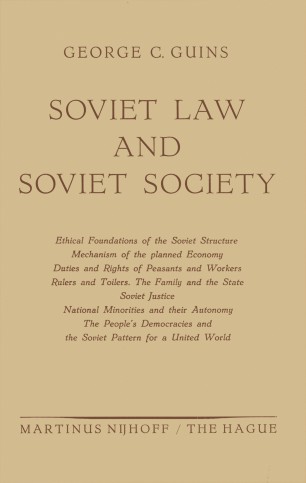 Ethical Foundations of the Soviet Structure. Mechanism of the Planned Economy. Duties and Rights of Peasants and Workers. Rulers and Toilers. The Family and the State. Soviet Justice. National Minorities and Their Autonomy. The People’s Democracies and the Soviet Pattern for a United World

Soviet power rests on two main supports: the comp1ete economic dependence of the citizens upon the state and the unlimited politi­ cal control of the government over the economic, social and even cultural life. History knows various kinds of despotisms, dicta­ torships and regimentations of economic activity, but the U .S.S.R. represents a unique kind of dictatorship based on the one­ party system and integral planning with the specific goal of realization of communism. Mankind had never before known such a system. Even the best of possible comparisons, the ana­ logy with the period of Ptolemies in Egypt, is good only in so far as it concerns the regimentation of all kind of economic activity. There was in the past no ideology pretending to be adjusted to the needs of the toiling masses, no planning system on the same scale and no Communist party apparatus. As concerns the modern world the comparative method is necessary for giving the most graphical characterization of the differences between the Western democracies, with their ethical traditions, rule of law and the principle of the inviolability of individual rights, and, on the other hand, the Soviet monolithic state, with its unscrupulous policy, extremities of regimentations and drastic penalties.