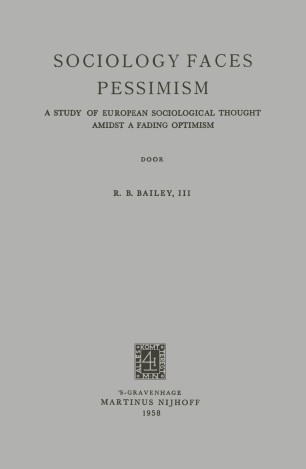 A Study of European Sociological Thought Amidst a Fading Optimism

My initial interest in sociology stemmed from the desire to see specific social change in certain areas of my native United States of America. My rather naive assumption at that time was that if the truth is known about social phenomena and presented to rational and educated persons, public opinion will bring about the desirable social change. That is, I assumed some automatic linkage between truth, rationality and social progress. Certainly some of the so-called "pioneers" of sociology also assumed this automatic linkage. Thus, the opportunity to study in Europe, on the soil of some of these "pioneers" heightened my interest and desire to learn more about the relationship between sociology and social progress. After living and studying several years in various parts of Western Europe - England, Germany, France, Holland - one finds that European sociology has remained very closely associ­ ated with social philosophy and history, has often been resisted by the universities, and is not as empirical as American sociology. The European sociologist, still quite conscious of the mistakes of the early fathers - Comte, Spencer, Marx, among others - is extremely cautious concerning problems of social progress and social action. He is aware that his science is still young and sus­ pect. He is also less sure than his predecessors about the exact role of sociology.