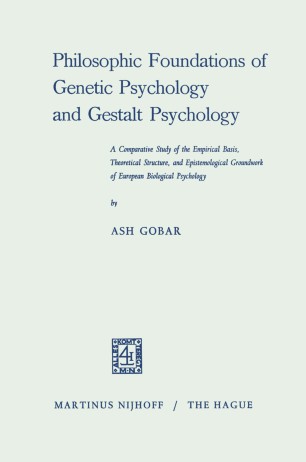 A Comparative Study of the Empirical Basis, Theoretical Structure, and Epistemological Groundwork of European Biological Psychology

XVI Psychologists have, however, shown that what we are primarily aware of is not a succession of sense-data but figures-ground phenomena: Wittgenstein's ambiguous duck-rabbit is merely one such example. They have also drawn our attention to the existence of tertiary qualities in perception, such as 'symmetry' and 'elegance' which are just as directly given as are the perceived colours red, green or yellow. It is interesting to note that Merleau-Ponty has made considerable use of Gestalt ideas in his Phenomenology of Perception. One of the commonest reasons given by linguistic philosophers for not making direct use of the results of psychological research (although philosophers are usually willing to accept the first-hand results of physical science) is that philosophical accounts of perception and thinking are concerned with analysing the language in which these reports are made; that is to say, they are second-order enquiries. Often this approach is still more restricted and ordinary linguistic usage is taken as the yardstick against which questions relating to thought and perception are to be measured. The task of the philosopher is then con­ fined to the analysis of ordinary language. If he is more adventurous, as some writers on philosophical psychology are, he might go on to show how far the language used by psychological researchers falls short of the paradigms of common sense.