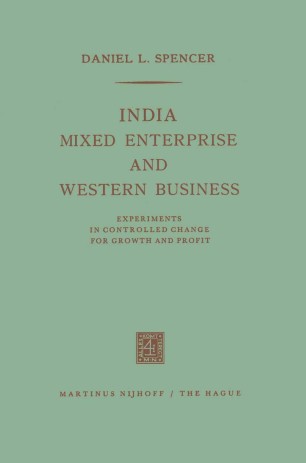 Experiments in Controlled Change for Growth and Profit

This book is a study of one type of relation between public authorities and the private sector. In the modern world it is becoming increasingly clear that these two ways of organizing economic life must learn to get along with each other and develop vehicles of mutual advantage. This is especially true in the re­ lations between advanced and developing economies because for historical reasons, the development of non-Western economies today is taking a course quite different from the path of the advanced business economies of the West. It is desirable for both spheres to try and understand each other and look for ways of getting along. International tensions can be alleviated to the degree that positive attitudes are taken and mechanisms of the kind dealt with in this book are created. Much of the problem is simply one of semantics. The term "socialism" or "socialistic pattern of society", for example, which is often used in India as a positive word has very negative conno­ tations for Americans. There are, of course, socialists in India who would make their economy entirely publicly owned, indis­ tinguishable from the Chinese or the Russian, but the vast majority of leaders associated with the dominant party in India visualize a present and future mixed economy not too different from that reached by the United States through a very different road. We in the United States have been nurtured on the belief in private enterprise.