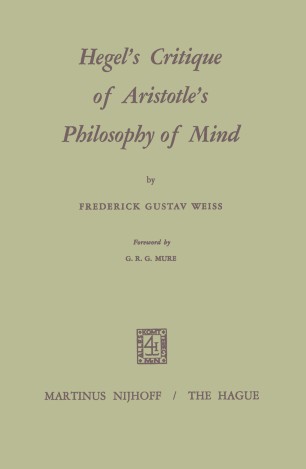 At opposite ends of over two millenia Hegel and Aristotle, virtually alone of the great European thinkers, consciously attempted to criticize and develop the thought of their predecessors into systems of their own. Both were thus committed in principle to the view that philosophy in each age of civilization is at once a product, a criticism, and a recon­ struction of the values and insights of its own past; that the fertile mind can only beget anew when it has acknowledged and understood a line of ancestors which has led to its begetting; that the thinker as little as the artist can start with a clean slate and a blankly open-minded atti­ tude to the world which he finds within him and before him. Man is by definition rational; philosophy is his continuous impulse to grasp and appraise a single universe of which he finds himself a part; philosophy therefore contains its history as a constituent element of its own nature, and the developmental character of philosophy must - unless human reason is, unthinkably and unarguably, a mere delusion - in some sense reflect, or even be in some sense identical with, an essentially develop­ mental universe - that is roughly the common creed of Aristotle and Hegel. Both of them further believed, as Plato had believed, that what is most real and intelligible in that universe is eo ipso most good.