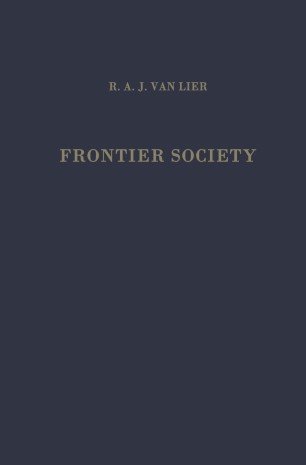 A Social Analysis of the History of Surinam

The Dutch version of Frontier Society (Samenleving in een Grens­ gebied) first appeared in 1949. A second Dutch edition of this work has been published in 1971, in the text of which a number of minor improve­ ments have been made and a few passages added here and there, though on the whole the work has remained unchanged. The English translation presented here is of the Dutch text for the second impression. It is more than twenty years since the book was first published. There have been no publications since which have induced me to introduce major corrections or additions to the original work, and although further research in the Public Record Office in The Hague has brought more material to light, this did not give cause for altering the picture presented or the examples given either. This is due in the first place to the character of the work, being an attempt at presenting a structural and historical analysis of the development of an exploitation colony based on slavery into the type of society found in many parts of the world outside Europe in the period preceding decolonization. But it is probably also a consequence of the paucity of historical publications about a country on which there is such a wealth of material available.