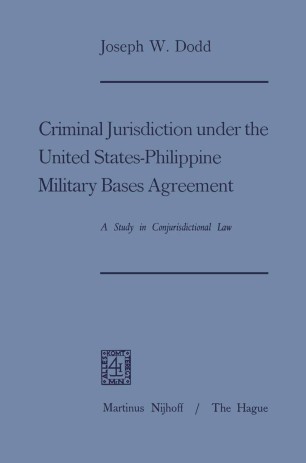 A Study in Conjurisdictional Law

The peace time stationing for collective security purposes of large numbers of military personnel of one country in the territory of an­ other country constitutes one of the most significant developments of postwar international relations. The United States, for example, has stationed nearly one half of its active military forces in over seventy 1 countries since the Korean War broke out. Stambuk noted that al­ though the theories rationalizing this situation have changed, "the overseas bases and forces remain. "2 As a direct result of this stationing of large numbers of troops in foreign countries numerous bilateral and multilateral status of forces agreements have been put into force. One aspect of these agreements which has attracted considerable attention is the provisions dealing with the right to exercise criminal juris­ 3 diction. As might be expected, a host of jurisdictional problems has arisen concerning whether jurisdictional rights lie with the states sending or the states receiving military personnel, the accompanying civilian component, and their dependents. As Snee and Pye have pointed out: "For the first time in the modern era, the sometimes radically different systems of law of two sovereign nations are operating within the same territory and in respect to the same individuals. "4 Thus a situation has arisen in which the relationships between the military authorities of the 1 George Stambuk, American Military Forces Abroad (Columbus, Ohio: Ohio State Vni­ versity Press, 1963), pp. 3-4.