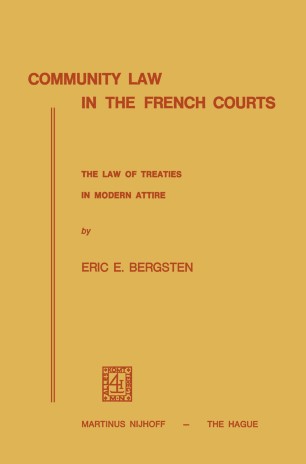 Community Law in the French Courts

The Law of Treaties in Modern Attire

The European Communities are only two decades old. The most important of the three Communities, the European Economic Community (EEC), is even younger, having come into existence in 1958. 1 Two decades have been hardly enough time to have more than reached, much less settled, the impor­ tant questions of the relationship between Community law and institutions and those of the Member States. Among the most challenging of the questions is the extent to which the courts of the Member States will fulfill the obligation of safeguarding the rights created by the Treaty of Rome in favor of private persons, both indivi­ dual and corporate, an obligation which the Court of Justice of the European Communities has said rests upon the national courts. This obligation flows naturally, though not necessarily, from the commitment of the Court of Justice to an effective Community. However, the result depends on that commitment, and there is a natural concern that the national courts may not share the commitment to an effective Community to a degree necessary to fulfill their obligations under Community law as those obligations have been defined by the Court of Justice. In order to fu1fi11 their obligations to Community law the courts of the Member States will have to solve some serious problems, and do it with comparatively little help from the Court of Justice.