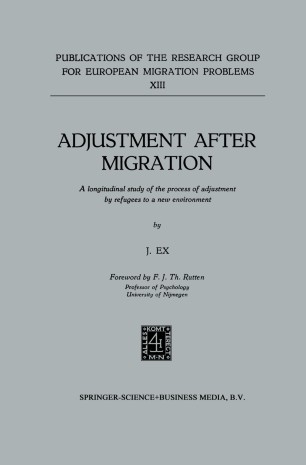 People are not so firmly rooted as they used to be. The greater frequency, at least in the Western world, with which people move house can be seen from the statistics. Many migrate voluntarily, or under compulsion, to build up new existences in other parts of the country or in other parts of the world. The problems which face people who are obliged to settle elsewhere have become matters of national and international political importance. Of recent years they have also become the subjects of sociological and socio-psychological research. The psychological research of which this book gives an account took place among families who some years ago emigrated from what was then known as the Dutch East Indies to the Netherlands. Dutch is the language spoken from their youth. Born and bred in another part of the world they embarked in groups to the Nether­ lands, which they had never seen before, when the country they lived in became independent. No doubt they had a vivid image of the Netherlands. It was the Mother country; they had heard a great deal about it in the course of the simple education they had received. They were acquainted with it through pictures and through the contact, however superficial, with representatives of the ruling country. The military service which had played such an important part in the lives of the male adults had made them feel bound up with the country of the House of Orange.