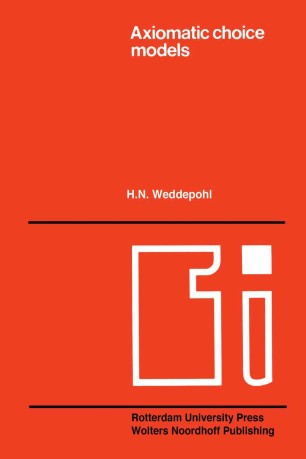 Every day people frequently have to make a choice. For practical and scientific reasons therefore it is interesting to know what choices they make and how they arrive at them. An approach to this question can be made via psychology. However, it is also possible to approach it on a more formal basis. In this book Dr. Wedde­ pohl describes the logical structure of an individual's rational choice. It is this formal, logical approach to the decision problem that makes the book interesting reading matter for all those who are engaged in the study of individual choice. The introduction apart this study may be divided into two parts. The first part, consisting of chapters II and III, deals with choice theory on a very abstract level. In chapter II some mathematical concepts are presented and in chapter III two related choice models are treated, the first one based on preferences, the second one on choice functions. The second part consists of chapters IV, V and VI and covers consumer choice theory. After the pre­ sentation of the mathematical tools, two models that are extensions of the models of chapter III are dealt with. In the discussion of consumer choice theory the concept of duality plays an important role and it is found that duality is closely related to the notion of favourability introduced in chap­ ter II I. Mr. Weddepohl's study forms an introduction to a larger research project to develop the theory of collective choice.