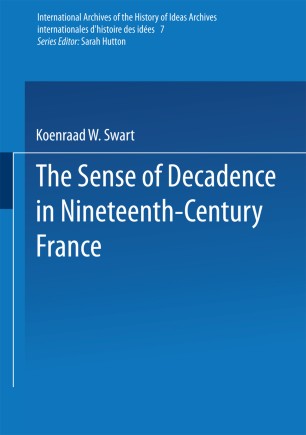 The Sense of Decadence in Nineteenth-Century France

"It was the best oftimes. It was the worst oftimes. " The famous open­ ing sentence ofCharles Dickens' Tale oJ Two Cities can serve as a motto to characterize the mixture of optimism and pessimism with which a large number of nineteenth-century intellectuals viewed the con­ dition of their age. It is nowadays hardly necessary to accentuate the optimistic elements in the nineteenth-century view of history; many recent historians have sharply contrasted the complacency and the great expectations of the past century with the fears and anxieties rampant in our own age. It is often too readily assumed that a hundred years ago all leading thinkers as weil as the educated public were addicted to the cult of progress and ignored or minimized those trends of their times that paved the way for the catastrophes of the twentieth century. In the nineteenth century the intoxicating triumphs of modern science undeniably induced the general public to believe that pro­ gress was not an accident but a necessity and that evil and immo­ rality would gradually disappear. Yet fears, misgivings, and anxieties were not as exceptional in the nineteenth century as is often imagined. Such feelings were not restricted to a few dissenting philosophers and poets like Schopenhauer, Kierkegaard, 'Dostoevsky, Baudelaire, and Nietzsche.