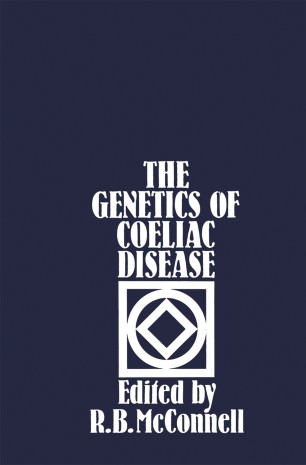 The Genetics of Coeliac Disease

R. B. McConnell During the past 10 years three international symposia on coeliac disease have been held. The first was in London in 1969, the second in Leiden in 1973 and the third in Galway in 1977. At each there were contributions on the familial, hereditary or genetic aspects of the disease but because all features of the condition were being considered at the symposia there was not the time for detailed discussion of the genetic aspects. These three international symposia were sponsored by Mr Jeremiah Milner and Welfare Foods (Stockport) Limited. During 1978 Mr Milner and I were aware of intensive studies being at various centres in Europe and America on the genetics of made coeliac disease, and we decided that to bring these teams together and let the members spend a whole day discussing the genetics of coeliac disease might well result in a valuable exchange of data and ideas; the discussions could also point to the most potentially fruitful avenues for further research. Professor Charlotte Anderson, Dr C. C. Booth and Professor Ciaron McCarthy joined Mr, Milner and me in forming a Steering Committee, and the International Symposium on the Genetics of Coeliac Disease was held in the Liverpool Medical Institution on 28 and 29 November 1979.